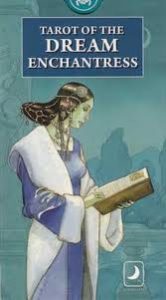 The Tarot of the Dream Enchantress was created by artist Marco Nizzoli and published in 2008 by Lo Scarabeo and Llewellyn. It is a 78 card Tarot deck, based on the Rider-Waite-Smith deck structure.

The deck comes with the standard LWB (Little White Book) that has the basic Tarot card meanings, two really cool dream interpretation spreads and some brief information about this particular deck and how to use it.

As soon as I looked through this deck, I could tell right away that artist Marco Nizzoli loves drawing naked ladies. And who can blame him? Nude pixies, fairies, and angels frequently prance through this deck. In this way, it is a very feminine deck, as all the cards feature women. There are very few men here, save for the occasional background lurker.

A very strange thing is that all the court cards depict women, even the Kings and Knights. All the Kings are actually women wearing bizarre masks. This kind of threw me at first and even after using this deck for years, it still catches me off guard. Even Major Arcana cards that usually depict men – such as The Emperor and The Fool – are instead women wearing creepy masks.

These masked figures are tough to read and it can feel like your trying to read a blank card. It’s like having a conversation with someone who is wearing sunglasses – it feels unsettling and irritating! You may find these masked ladies intriguing, who knows? But it just didn’t work for me.

What is really amazing about reading with this deck is that you feel like you are stepping into a different realm – a realm of naked pixies and scantily-clad angels. This seems like such a free, innocent world and when you read with these cards, that sense of freedom rubs off on you. This is perhaps what I love about this deck!

Another bonus is that this is not a Rider-Waite “clone” deck as it strays a little from the conventional meanings in many cards, but not so much that it becomes a struggle to read with. The meaning of each card isn’t always obvious, which forces you to contemplate the images and interact with them, making for some interesting readings. 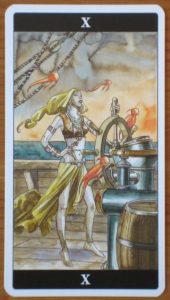 You will not see any words on these cards. The Major Arcana are indicated by Roman numerals and the Minor Arcana cards have a symbol at the top – like a cup or wand – and a regular, non-roman numeral number at the bottom. This is both annoying and a relief.

I find it less distracting when there’s an absence of words and this lets me access my intuition more easily. But since I don’t know Roman numerals very well, I have to rely completely on the Major Arcana card images to tell me what card is what. Sometimes it gets confusing, but overall I really like this design.

I have had this deck for a good four years now and I am well past my “honeymoon phase” with it – I often buy a deck, fall in love and then quickly lose interest. Not so with the Tarot of the Dream Enchantress. This is one of those decks that I just keep bringing out again and again to play with. I say “play” because I rarely use it for doing professional readings. I use it for creative writing inspiration, meditation, contemplation, journalling and personal readings.

Buy this deck if…

Purchase this deck on Amazon.com (this is my affiliate link)

4 thoughts on “Tarot of The Dream Enchantress Review”