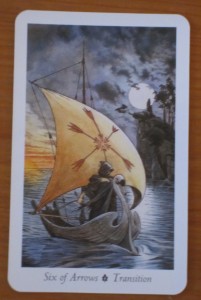 Six of Arrows (aka Six of Swords) is today’s Tarot Card and the theme is Transition.

Whether you realize it or not, you are transitioning from one place to another and you are divinely guided and protected as you make this move.

The Six of Swords can represent a physical move to a new location or a change in career/job, but it most often symbolizes a shift in perception and belief. You are leaving your negative mindset behind and traversing the waters of possibility and positive thought.

You may feel somewhat apprehensive about this, which is natural. If fear comes up for you in this time of great discovery and release, call upon your angels, spirit guides, higher self, or otherworldly allies to help you comfortably integrate these changes in your life. They are always there for you and want you to succeed!

13 Responses to Six of Arrows ~ Tarot Card for Wednesday