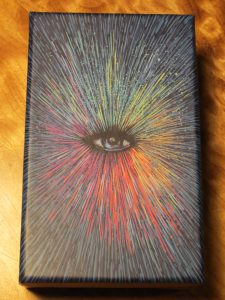 Minor Arcana suits form a long picture when you lay them out (more on this!)

One extra special card that is unique to the deck

Tricky to shuffle because of thick card stock and glossy finish

You know you’ve got a high quality deck as soon as you hold the Prisma Visions Tarot box in your hands. It’s beautiful and sturdy and when you crack it open you see the mystical looking card backs of the deck nestled inside…

I was lucky enough to receive the Prisma Visions Tarot as a gift from one of my students almost a year ago. As soon as I opened the box and looked through the deck I thought “this deck is mine and it’s only for me!” which is funny because I don’t usually get possessive with my decks.

I have found this deck to be a welcome challenge in my reading practice. The cards aren’t always easy to decipher but they beg to be contemplated and pondered. This has helped me get new ideas and insights that can only come when you sit with a card for some time.

Prisma Visions Tarot is gorgeous. The Cards are vibrant, richly colored and pulsate with energy and movement. And I LOVE the fact that the minors don’t have borders.

One of my favorite things about this deck is this: each suit when laid out in order (Ace to King) forms one long, continuous picture. See my video above for a demonstration. This allows you to really study the minors in a whole new way as you get to see the story of each suit unfolding and see each card in a greater context.

Is there anything NOT to love about Prisma Visions Tarot? I have two minor gripes…

I don’t love the fact that the Majors have borders. It make the cards seem smaller than they actually are although I guess it’s easier to tell them apart from the Minors.

The other thing I don’t like is that this deck is a bit cumbersome to shuffle. The cards are normal size but their thick, good quality card stock makes them un-bendy and their glossy finish makes them slippery. If you have big strong hands this shouldn’t be an issue but I’m a weakling in this department.

I was recently sent the Light Visions Tarot (for review) and it’s been really fun working with both decks and comparing and contrasting them.

The Light Visions Tarot was actually the original, colorless deck. The Prisma Visions Tarot is basically the colorful version of that deck, with a few minor differences.

After working with the Light Visions deck for a week or so, I still cannot decide which deck I like best.

These decks each have a slightly different energy to them – the Prisma Visions is bright and alive while the Light Visions beams with…uh, light and takes on an etherial, other dimensionesque feel.

I have to say that I appreciate the simplicity of the Light Visions Tarot. Sure, lots of vibrant color is great and all but sometimes your just like enough with all these mind cluttering hues, I need a break!

And that’s when a color-free deck like the Light Visions Tarot can feel like a sigh of relief, like a cool, dark basement during a heat wave or the soul-nourishing quiet of your own home after your friend with three kids has left.

Sometimes your mind needs kind of that space, that kind of calm, to access the intuitive realm and this is what the Light Visions accomplishes so beautifully. Fuck color! You don’t need it.

Just kidding. I love a big, bright, colorful deck but I am starting to really appreciate the black and white decks too. Although the Light Visions isn’t really black and white, it’s more dark purply and sepia/cream.

Should you buy this deck?

I wouldn’t recommend this as your first deck. If you’re brand new to Tarot get something easy like the Rider Waite or Robin Wood. Then get this one when you want something meatier!

Readers with a bit of experience will appreciate this deck most and anyone looking for a bit of a challenge. Deck collectors will want this one in their collection for sure.

This deck also makes a fantastic gift for the Tarot lover in your life 🙂 I say this because of the exceptionally beautiful box that the deck comes in!

To purchase or find out more about his deck: