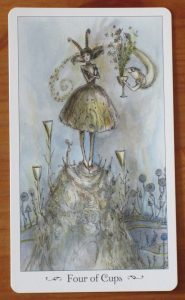 Are you ignoring a golden opportunity? Today’s Tarot card, the Four of Cups, suggest you might be! Your expectations may be very high, which is good, but don’t forget to look beyond appearances.

Something that might seem totally boring could actually turn out to be a delicious experience! So if you find yourself feeling a bit closed off to people or to trying new things, loosen up a bit.

Something will be presented to you today and you will be tempted to turn away or just ignore it – but look again, think twice and don’t be so quick to say “NO!” this time.

6 Responses to Four of Cups ~ Tarot Card for Tuesday