It’s been a while since I presented you with a new Tarot challenge, so I decided to make this one extra tough…..by using only Court Cards!

First I will present you with a fabricated scenario:

You are doing a reading for Stephen – a middle aged man who works stocking vending machines in government buildings. Stephen has been divorced two years, has two teenaged daughters who hate him (he sees them every other weekend) and a Chihuahua with a bladder control problem.

Despite this dreary description of Stephen’s life, he is actually quite happy and content. He is coming to you for a reading because he’s just met someone new – Larissa – a new-agey maven who runs the local crystal shop.

They’ve been on a few hot and heavy dates and now Larissa wants him to come to Sedona with her for a Shamanic drumming weekend. He is reluctant. He hates that shit! But he doesn’t want to upset Larissa. What should he do?

You shuffle your cards, lay them out and turn them over. This is what comes up….. 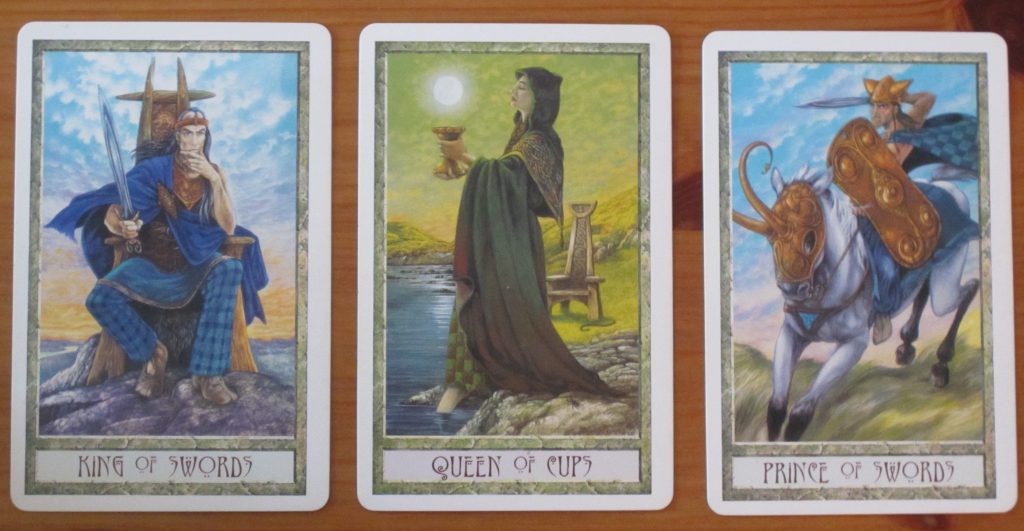 Remember: Court cards can represent people and/or personality traits. They can suggest how to act (or how not to act). Notice the facial expressions, body language and action in these cards.

You are not using a particular spread, so feel free to interpret the cards however you like.

So….what advice would you give Stephen, based on these three cards?

Please post your interpretation/reading in the comments below. This challenge is open to ALL levels of readers – so don’t by shy if your a beginner!…I can’t wait to hear what you come up with 🙂