Have you ever tried reading Tarot with a deck – like the Tarot of Marseille or the Thoth Tarot – whose minor arcana cards don’t have pictures on them?

Did you feel blank and empty and wonder what am I supposed to make of this?

Long before the fully illustrated Rider-Waite Tarot deck burst onto the scene in 1910, all Tarot decks had non-illustrated minor arcana cards, much like a deck of playing cards. These decks are often referred to as “pip decks”.

Back in the day, people had to chop wood, walk several miles to school, barefoot in the snow, use sheep intestines for condoms….and read Tarot using decks with NO F**KING PICTURES ON THEM!!!!

It was rough. And now Tarot readers everywhere have become soft. We expect lavish pictures on all the cards. We expect our intuitive insights to just be handed to us on a silver platter. Jeez!

The Rider-Waite deck was unique in that the artist Pamela Coleman Smith depicted scenes and characters on it’s minors, making them easier to learn and read. Lazy Tarot readers loved it and it remains one of the most popular decks today.

But that doesn’t mean you should just disregard non-illustrated pip decks. Like learning to drive a standard, there are certain advantages to reading with these types of decks despite the extra trickiness. And people will be impressed.

Why it’s so tricky

Symbols are the language of the soul and so gazing at a card that shows a symbol-rich scene can stimulate intuition and creativity.

But when you see a minor arcana card that’s just two boring wands or four pentacles with no other frills in sight, it doesn’t give you much to work with. So I’m going to teach you a couple tricks to make reading these non-illustrated minors a breeze…

But first a confession

While the Thoth Tarot was one of my first decks, I didn’t truly learn to read non-illustrated minors until I got the Mystic Meg Tarot a few years ago. And there’s stuff I love about reading these kinds of cards – but it’s not my favorite.

From the Mystic Meg Tarot, I drew the Eight of Water (8 of Cups). 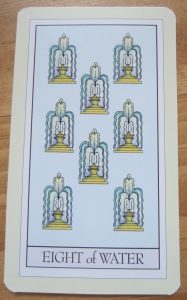 Step #1 – Identify the Suit and the suit qualities

This card is of the suit of water (cups), which is about feelings, emotions and relationships. Therefore, we know this card is telling us something about our feelings and perhaps a relationship (to a person, to ourselves or to a thing).

This is where it helps to know your suit qualities. Let’s do a quick refresh:

If you’re still not 100% confident in your understanding of the suits, try this with a Rider-Waite style deck (not a pip deck): group all the minors by suit so you have four groups of cards. Then, spend some time looking at each suit and really getting a feel for the energy of that suit. Compare and contrast the different suits until you have a clear sense of what each suit represents.

Each suit expresses the numbers differently and it can be a really interesting exercise to group your minor arcana cards by number and then study them, which I’ll do in a sec.

We have an eight here. You don’t need to know anything about numerology (I don’t) although it probably helps. We know eight is an even number and even numbers can signify stability/harmony or stagnancy/boredom.

We also know that eight is one of the bigger numbers. If we’re progressing from Ace to ten, eight is almost at the end. We’ve reached a certain point of achievement.

Just for fun, let’s look at all the eights in the Universal Waite Tarot… 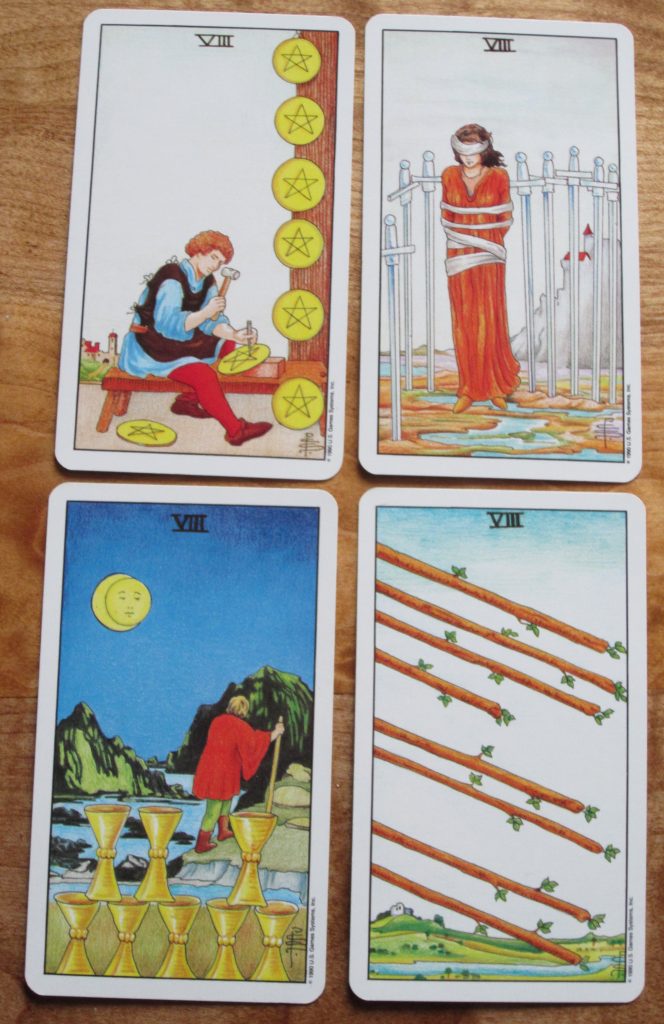 In my opinion, the wands and swords seem to mirror each other in that they show what happens when there’s an abundance of their suit quality. With wands we have lots of energy, which propels movement, speed and things unfolding quickly. While with the swords we have an abundance of thought and mind activity which can tie us up and make us feel imprisoned.

With the 8 of pentacles, we see an abundance of work and how this can lead to being busy. But the 8 of cups is very different from all the rest in that it shows someone retreating away, in search of the missing cup. It’s like his feelings have become so strong now that he can no longer ignore them – he must abandon his stacked cups and address the root of his unease.

See what I mean? You can learn a ton about your cards when you group them this way and look at them!

Okay, let’s get back to our original eight of cups. Based on what we know about this card we might say that it’s message is about feeling emotionally stable, yet longing to break away from the stagnancy of daily life. Or we could say that we’ve made lot’s of headway in the realm of emotion and relationships but something is still missing (we still have a way to go before we reach #10).

Essentially, when you read a “pip card” you are drawing on your understanding of it’s suit and it’s number. I also cheat a little and imagine the Rider-Waite equivalent.

What I love about reading with Pip decks

When I’m giving a Tarot reading to someone, I know they’re looking at the cards and possibly drawing their own conclusions (if they know Tarot) or making judgements about the cards. For example, the ten of swords or the five of pentacles often get a negative reaction from people.

But if the person I’m reading for has no idea what my cards could possibly mean, that makes me feel more in control of the reading. I don’t need to do damage control and say “don’t worry, the ten of swords doesn’t mean you’ll be murdered” – I can just go with my own intuitive reading flow.

Better yet, the absence of symbols can sometimes be a blessing. At times I find it easier to get intuitive ideas when there’s less visual noise. It’s almost like it creates space around the reading and gives me a little more creative license.

So let’s give it another try! Here’s the four of fire (Wands) from the Mystic Meg Tarot… 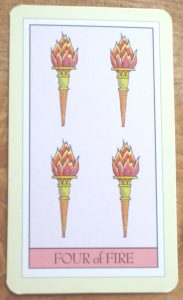 Remember – use your knowledge of the suit, number and your imagination! Feel free to share your interpretation in the comments below…

12 thoughts on “How to Read Non-Illustrated Minor Arcana Cards”