I’m often asked “how did you get into Tarot?” Well, here’s the story…

I first discovered Tarot back in 2008, during a tumultuous and exciting time in my life. I had just up and quit my boring 9-5 office job and had no real plan. I was trying to find my own path and figure shit out.

Immediately after quitting my job I became powerfully drawn to all things metaphysical – filling my apartment with crystals, angel decks and singing bowls. I’ve since seen this happen to recently divorced women in their 40’s and 50’s but for me it happened in my 20’s after I’d divorced my job.

A friend of mine was learning Tarot and that got me thinking can just anyone learn to read Tarot?

I’d always thought Tarot readers were just born knowing how to read – like it was something that ran in their family. I didn’t realize that any basic Joe Blow could figure it out.

That’s when it suddenly dawned on me: Holy shit, I could learn Tarot!!!

I fantasized about busting out my Tarot deck at parties and impressing everyone with my mysterious skills and exotic flair. I would be so much more interesting, I thought.

I always love learning and I love a challenge, especially one that doesn’t challenge me too much. So I went lurking on Amazon and ended up buying three decks:

The Secret Tarot (an interesting, yet weird deck that was terrible to learn on) and mini versions of the Rider Waite and Thoth decks, along with a couple of Tarot books. 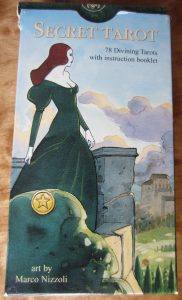 Being unemployed, free time was copious and I spent most of it diving into the endlessly complex and confusing world of Tarot. I gave myself hundreds of readings. I gave my friends and family readings – mostly pathetic, unimpressive ones, but still.

But what I really yearned to do was read Tarot for strangers! This was the epitome of Tarot achievement in my opinion. The idea filled me with both anticipation and slight terror.

What drew me to read Tarot for others…

Sad confession: most interactions I have with people are pretty shallow. I make safe small talk with grocery store cashiers and neighbors and when I get together with friends we usually chat about TV shows and other people’s sex lives. Fun stuff but not exactly deep! So the mere thought of sitting down with a complete stranger to hear their deepest concerns and big life questions filled me with longing. I wanted to have those kinds of interactions with people!

My first reading-for-strangers gig happened after I’d been studying the Tarot for about two years. A friend of a friend was having a party and thought it would be fun to have me do readings in her basement. I wasn’t yet a “professional” reader so I did it for free, hoping this would keep people’s expectations low. It’ didn’t. But the night was an overall success, save for one woman getting all snippy with me because all the cards in her reading were positive and her life was so miserable (!)

A few months later, I lost my job (I’d since gotten a part-time job after leaving my old 9-5) and I was in need of cash. At that time I was doing several different things – teaching yoga, personal training, reiki and bellydancing and I boldly decided to add Tarot reading to the list.

At this point my husband joked that the people at Vistaprint were probably rolling around laughing every time I sent in a new order for business cards.

Why I went Pro…

The main reasons I decided to learn Tarot was because it intrigued me and I saw it as a potential way to help and connect with people. But the reason I decided to go pro and start charging for readings was simple – I needed some extra cash!

While reading Tarot is the crappiest way to get rich, it’s a pretty decent way to earn some money on the side.

I was struck by how rewarding giving readings was, but also how frustrating it could be. The weird questions I’d get asked and the ridiculously high expectations some people had would sometimes make professional Tarot reading an exhausting endeavor.

But most of my clients over the years have been wonderful and there’s something so special about being able to submerse yourself in someone else’s story for 30 minutes.

It continually amazes me how the cards reveal just what that person needs to hear in this moment and over the years I’ve grown to trust what the cards have to say.

*I’ll be sharing everything I know about reading Tarot for others in my upcoming 4-week course (classes start May 1st!)

Here’s another true confession. I’ve done this twice now and I’m not proud of it, but I think you’ll find it interesting…

I was doing a reading for someone (online, via email) and after I laid the cards out and flipped them over I thought this can’t be right! These cards are so off! So I scrapped the reading, saged my reading space and started over. I shuffled again and laid the cards out and guess what? The second reading was basically the same as the first.

This kind of thing happens all the time when I’m reading for myself – I don’t like the cards I get so I re-do the reading (I know, I know, you’re not supposed to do that!). But the second reading almost always says the same thing as the first one. So I now trust the cards that show up. Unless I really don’t like them 😉

So now I want to know…

How did YOU get into Tarot? What drew you in? Tell me in the comments below!