Will a 3 Day Juice Cleanse Make Me More Psychic?

Have you ever done a juice cleanse? Well, I hadn’t. Until now.

I’d fantasized about doing one for years. I pictured myself smiling as I drank green juice out of a mason jar through a biodegradable paper straw. And then skipping barefoot on a sandy beach, feeling so light, free and clean since all I’d consumed that day was juice.

But I’d avoided doing it because, well, the part of me that didn’t bullshit myself knew it would totally suck.

But then I went camping.

And after that I got a Brazilian wax.

And I thought you know what? I’m on a roll of doing horrible things, so why not try a juice cleanse? 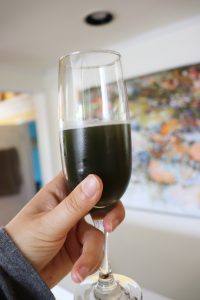 There was another reason I wanted to try a juice cleanse. Years ago I’d read that if you eat fresh fruits and veggies and avoid dairy, wheat, sugar, meat, alcohol, drugs and everything fun in life you can raise your vibration.

Having a high vibration is supposed to be awesome. It makes you more psychic and intuitive. You can tap into energies, communicate freely with spirit guides and have divine, ecstatic experiences. Life becomes magical. Or so I’d been told.

So I decided to give it a whirl and see if doing a juice cleanse would blast me into a whole new stratosphere of psychic ability.

How I evaluated my level of psychic ability

1) I closed my eyes and randomly opened a page in one of my art books, placing a hand over that page and trying to discern what was on that page with the palm of my hand (and NOT my eyes!). I then gave myself a score of 1-10, depending on how close I was. 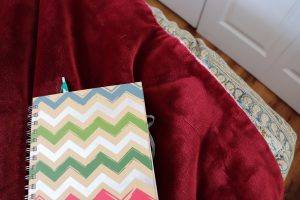 My dream journal….where it all happens!

The week before the juice cleanse

Nothing special happened here. In preparation for the juice cleanse I began craving things like pizza, cheese, apple cider, brownies and potato chips. I ate these things. 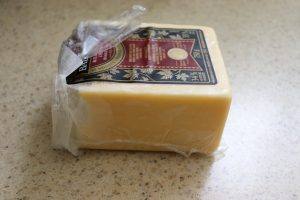 I had zero psychic experiences to report in my journal and I didn’t remember any of my dreams. When I evaluated my psychic ability by doing the magazine exercise above, I failed miserably. I rated myself a 2 out of 10 on the psychic front.

I decided to do a modified juice cleanse and just drink juice, water and herbal tea until dinner, which would basically consist of a bunch of raw veggies and maybe some beans or something. Yeah, I know. I really know how to have fun!

I ordered the juice from a fancy company that makes really nice raw, organic, fresh pressed juice. I have a juicer but it’s a total pain in the ass to clean and I couldn’t imagine doing it like five times a day. I’m not a rich lady, I just act like one.

I woke up starving and so I ate breakfast anyway (chocolatey oats with raspberries and brazil nuts) but then I also drank two glasses of juice along with some tea. 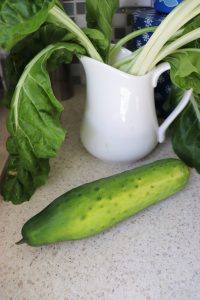 By 3pm I was going batshit nuts with hunger (even though I’d had a full breakfast, drunk a shit tonne of juice and had probably only burned 2 calories), so I caved and made myself a full plate of stuff from my garden – tomatoes, green beans, cucumber, home made sauerkraut, fancy green olives, half an avocado and some black beans with olive oil. Not exactly junk food, but also not exactly juice.

By dinner I was insane with hunger again, even though I’d eaten breakfast, lunch and like five huge glasses of juice and a huge mug of herbal tea. For dinner I made a green salad with fried tofu and a spicy peanut sauce. It was fuckin’ good! Then I washed it all down with a few more glasses of juice!

In conclusion I will say this: I ate what I normally eat in a day, plus an exorbitant amount of juice. So day one of the three day cleanse was not perfect. Okay, it was a total failure. Maybe I’ll do better tomorrow.

I woke up and told myself I’ll drink juice until dinner, it won’t be that hard. Juice after all is FULL of calories in the form of sugar. 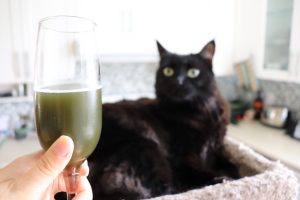 But by noonish I felt my brain going fizzy and fuzzy and my emotional state become more fragile by the second. I didn’t want any more fucking juice. I wanted normal food that would actually sustain me.

So I ate a bunch of white bread with cheese. Yum. Better than green juice. I washed it down with two huge mugs of black tea. Finally, I feel normal again.

For dinner I ate a huge plate of pasta with pesto sauce and olives. God I love food. Lest you think I’m cheating on this juice cleanse, fear not – I continued to slam juice every couple of hours.

At the end of the day as I was cramming my mouth with my bedtime snack of cashew milk (part of the cleanse) and crackers and cheese (not part of the cleanse), it occurred to me that what I was doing was the opposite of a juice cleanse – it was a juice binge!

The idea behind a juice cleanse is that by drinking only juice, your body gets a break from digesting solid food and when it’s not busy breaking down food it can get to work expelling toxins.

And toxins are the new agey/yoga version of demonic possession.

I figured once all those pesky toxins were out of my system, my vibration would skyrocket and I’d morph into a sacred vessel of love and light. Sadly, that didn’t happen. 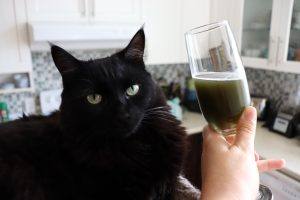 Despite drinking my body weight in juice, nothing magical occurred. I am still the same person. Fuck.

Yeah, I know what you’re thinking – but Kate, you aren’t even doing the juice cleanse correctly! You’re just eating whatever and drinking tons of juice. Don’t expect miracles here.

Maybe YOU should try a juice cleanse then, if you think you’re so perfect.

Can you tell I’m cranky? It’s because I’m cleansing.

After my juice binge, I re-evaluated my psychic abilities.

Not only did my psychic journal not reveal any noticeable uptick in psychic experiences, the pages were totally blank! I didn’t even remember any of the weird sex dreams I’d undoubtedly had over the past week.

When I re-did the psychic exercise where I try to discern a picture with the palm of my hand, I once again failed miserably. So no change there.

The week after the juice cleanse

A few days after finishing my “cleanse” I was noticeably more bloated and gassy. I actually thought I’d gained a solid ten pounds. Thankfully it turned out to be extreme bloating. I think all the sugars in the juice messed with my gut bacteria and caused things to go haywire. I took a few probiotic pills and within a few days, I looked and felt somewhat normal again. Phew!

Did I notice any change in my psychic and intuitive abilities one week after the “cleanse”? NO. But maybe if I’d actually done a cleanse and not a binge, I would’ve had results. It’s hard to know.

Would I do a juice cleanse again? NO.

Do I think there is a link between diet and psychic ability? Possibly. I’m still really interested in exploring this further, as long as I don’t have to suffer too much.

What do YOU think?

Have you noticed a link between diet and psychic/intuitive ability? Have you ever felt that certain foods blocked your intuition or ability to sense energy? Or that certain foods enhanced things? Please share your thoughts in the comments below!

31 Responses to Will a 3 Day Juice Cleanse Make Me More Psychic?