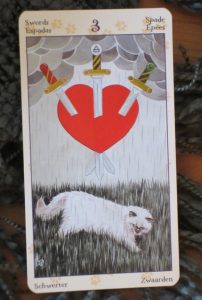 Tarot of the Pagan Cats by Lo Scarabeo

The Three of Swords is today’s Tarot card and although this is usually not everyone’s favorite card, this version is somewhat funny with a sulky cat on it! Your a bit pissed off about something today – that’s okay, just don’t let it run your day.

Normally this card represents heartache and feeling betrayed by someone (usually a lover), but I feel like it doesn’t really indicate anything that serious.

You may feel put out about something someone said or did. It was a minor thing, but it bugged you. Part of you kind of wants to wallow in your resentment and another part of you says its not worth it! Focus on something more positive.

This is one of those things that you will forget about in a couple of days, so indeed, focus on something more positive!

18 Responses to Three of Swords ~ Tarot Card for Tuesday