I was standing in line at the grocery store yesterday, reading Star magazine (my trusted news source) when an idea for a really fun Tarot exercise came to me.

Do you ever wonder why you are fascinated by particular celebrities or fictional characters? I do. And I figured there had to be some deep, twisted psychological explanation for it. So I decided to consult my Tarot cards to get the juicy deets…

Step One:
Ask yourself what celebrity/fictional character do I find most fascinating? (or, which celebrity do I have a crush on?). Then, go through your Tarot deck and pick out 1-3 cards that best represents this person. These are the qualities that you are powerfully drawn to, whether you realize it or not.

If you don’t care about celebrities or fictional characters and have no idea who anyone is, then you can substitute a real person in your life – preferably someone you feel drawn to and find extremely intriguing. Like the long-eyelashed mailboy at your office, or the neighbor’s wife. Or your spouse, I guess.

Whoever it is, ask yourself who they would be in the Tarot. Are they the bright eyed and bushy tailed young man in The Fool? The stuffy, constipated Emperor? The spazzy juggler in Two of Pentacles? Or perhaps a combination of the three?

Step Two:
Ask yourself what that Tarot card means to you right now.

When I did this Tarot experiment, I picked James Bond as my fascinating fictional character (the Daniel Craig version). I am intrigued by the way he coldly kills people, rides motorbikes on rooftops, heartlessly kills people, jumps out of moving trains and kills people, all without giving it a second thought. So sexy! 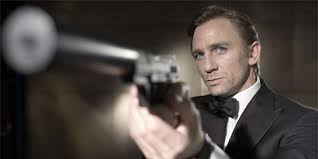 Without boring you to tears with the details of my personal life, I will say that these three cards accurately reflect what’s going on for me right now.

The Five of Wands represents an inner struggle of conflicting interests (I want to do this… no, I want to do that), Eight of Cups reveals that I am indeed turning my back on something and The Moon illustrates my desire to keep my life very private and my feelings hidden.

In the comments below, tell me what celebrity (or person) you chose and what cards you picked to represent them and why….can’t wait to hear!!!!

18 thoughts on “Decode Your Celebrity Obsessions With Tarot”