Veronica Noir is my batshit crazy twin sister. She is just like me except she’s brilliant, has no sense of guilt or shame, speaks her mind and does whatever she wants, when she wants! Kind of like a psychopath….but with a heart of gold. Oh, and she also reads Tarot… 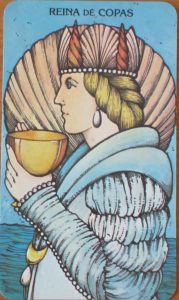 To be inundated with boring work parties, excruciating family get togethers, shit Christmas music warbling in the background as you shuffle through the mall and the worst thing of all….buying presents for other people. Blech!

“Well at least there’s lots of alcohol around,” purrs the Queen of Cups. “So drink up, slut!”

When you see this Queen’s far off, glazy stare you just know she’s thinking “I’m gonna need to knock back two more goblets of Dubonet to survive listening to Larry from finance drone on about World of Warcraft for the next hour.”

So my advice for this weekend is this: use whatever aids you have available to you – ahem! hard liquor – to help get you through this difficult time. And if you end up behaving inappropriately as a result, well…blame it on whoever’s closest. Especially if they’re dressed like a whore.

4 Responses to Queen of Cups ~ F*ck this Christmas sh*t!