Veronica shows you how to be lazy…

Veronica is my evil twin. I let her write on my blog only on Fridays. She is a part time Tarot reader, full time gangster of fabulousness. While you can find her many places…you won’t find her volunteering, attending lame office Christmas parties or pretending to like children… 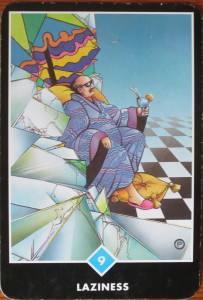 Today’s card is Laziness (aka Nine of Cups) from the Osho Zen Tarot.

Laziness – it’s the greatest taboo in our culture while simultaneously being dangled in our faces like a carrot called “retirement”.

Don’t put off rest and relaxation for when your retired – that’s one of those creepy ideas that the social control system churns out to trick you into working yourself to death.

So if you don’t master it now, don’t expect to retire and “poof!” suddenly be able to just sit back and chill out while binge watching old episodes of  The Vampire Diaries on Netflix. It just won’t happen.

But hear me when I say laziness is a fine art. You have to be careful not to overdo it.

Laziness, while artfully done, always feels good, nourishing and a little bit naughty. But if it makes you feel de-motivated, irritable and hating all of humanity, then you’ve fucked up big time.

So this weekend….be a bit lazy. And if some twit says “keeping busy?” when they run into you on the street, say “NO” and watch what happens!