Veronica is my evil twin/alter ego who reads Tarot on my blog every Friday! In between reading Tarot you can find her getting day drunk on her balcony, snoring in a yoga class and on AshleyMadison.com, pretending to be married. 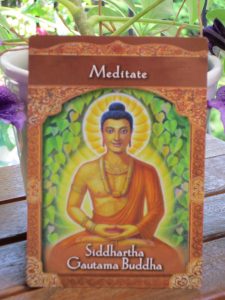 Are you one of those people who think you should meditate, but never seem to get around to it?

Here’s a tip: Meditation is just doing nothing.

Everyone thinks it’s some mystical thing requiring discipline and spirituality. It isn’t.

I would say it’s just like being lazy but it’s so much more than that…..it’s being lazy on purpose!

The reason you’re having trouble meditating is because you’re associating it with monks and jerks who do yoga. Stop it!

Meditation is the ultimate freedom – better than rollerskating with no underpants on or calling in fake-sick to work and staying home to eat chocolate-peanut-butter Coconut Bliss ice cream while watching Vampire Diaries re-runs on Netflix.

Want to meditate more? Start thinking of it as a time when you don’t have to do shit. You don’t even have to think! Which is probably why you watch all those stupid TV shows in the first place! Am I right?

This entry was posted in August 2016, Veronica Noir. Bookmark the permalink.

3 Responses to Meditation = Doing Nothing!