Well, I cannot BELIEVE it is August already!!!! But it is. And here’s my reading for the week ahead, using my fave deck, the Dame Darcy Mermaid Tarot ….

Have a wonderful week and please feel free to add your own two cents on this reading in the comments below!

Oh, AND, I am featured in Biddy Tarot’s new ebook Real Life Lessons from the Major Arcana  – it’s a free ebook and a really fun read! 21 different Tarot authors have written about their personal experiences with the Majors. I chose The Devil and you can read my bit on this card right here.

Veronica is my rude, bitchy, diabolical twin. She reads Tarot, swears like a sailor and like all dysfunctional people, she loves to give advice…. 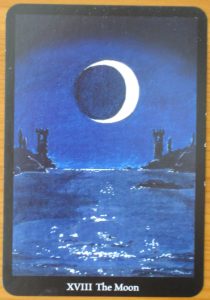 Finally, after the seemingly endless blaze of the Sun, we get the cool relief of darkness, illuminated by a scanty sliver of silver moonlight…..

The Moon encourages introspection. It is time for you to go within. The sun is loved by morons everywhere because its big, bright and fucking yellow.

The sun allows you to get distracted by everything, and live a life outside of yourself. The Moon doesn’t stand for that shit…

It’s harder to get distracted when you’re immersed in darkness. But the milky glow of the lunar sphere gives you just enough light to lead you back home to yourself.

Crazy-ass dreams are in the realm of The Moon – so pay attention to them! Don’t be one of those dicks who says “it’s just a dream.” Um, no it’s not. It’s a fucking magical vision, so have some respect!

Write it down, contemplate, explore, ask yourself some deep questions. Don’t just roll out of bed and pitter patter off to the beach to scope out cute boys and drink peach cider out of a thermos. Well, do that, but write down your dream first.

I guess I was in a bit of a New Agey mood today because I picked my Conscious Spirit Oracle Cards to read with!

Have a fantastic week 🙂
xoxo
Kate 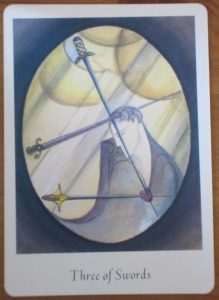 The other day I was sitting on the beach, reading Star magazine and sipping Margarita out of my stainless steel thermos, when two seagulls started to scrap!

This one seagull was a total dick, brutally attacking the other seagull and stealing his starfish. It was quite a scene.

But then like 20 seconds later, I spy these same two seagulls sitting side by side like lovers, watching the waves crash against the shore.

And I said “no, they’re just really dumb. They don’t remember.”

Because Seagulls don’t have big, clunky human brains they lack the capacity to ruminate and stew about the shitty behavior of others. Lucky bastards.

So the message is this: you can either be an intelligent, grudge-holding, miserable mess or dumb and blissful.

No, you can’t be smart and happy – don’t be a greedy bitch!

So get to work and start putting your attention where it belongs….on dumbing yourself down.

You can start by reading Star magazine for a minimum one hour a day – that’s been working for me ????

Happy Sunday! Here is your Tarot reading for the week ahead…..

Have a wonderful week 🙂
xoxo
Kate

Veronica Noir is my batshit crazy twin sister. She is just like me except she’s brilliant, has no sense of guilt or shame, speaks her mind and does whatever she wants, when she wants! Kind of like a psychopath….but with a heart of gold. Oh, and she also reads Tarot… 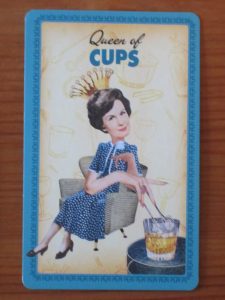 It’s okay to care about other people….

But don’t care about what they think of you.

You can be a kind, caring, boring person AND go about your day without ever giving a flying fuck what other people think of you.

The Queen of Cups over here knows this shit. She knows it well.

She is compassionate, nurturing and really does care about people. But she sure as hell isn’t going to self-censor and pussy foot around town trying to be all P.C. and fit into the woodwork.

No. She lives her life her way and does it without feeling all guilty and shit.

Be like this Queen today and don’t make the mistake that you’ve probably been making all your life….telling yourself that you’re helping others by caring about what they think of you.

You’re not. You’re just failing to inspire them to live life on their own terms.

Hello! Here is your Tarot reading for the week ahead. For this reading I’m using my Housewife’s Tarot, which is a favorite of my evil twin Veronica’s 🙂

Have a wonderful week!

Happy Friday! My evil, Tarot reading twin Veronica is here to tell you how to live your life. Seductress by night, Lady of Leisure by day, Veronica’s loves include gossiping about other people, judging other people, daytime drinking and sorting the recycling ALL WRONG!!!! Let’s see what advice she has for us today…. 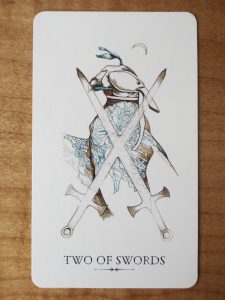 Decisions, decisions! That is what the Two of Swords is all about.

Should you lay in your hammock and read War and Peace or some trashy Jackie Collins novel?

Do you make fillet mignon for dinner or eat a bag of chips and a Bloody Mary?

Will you watch The English Patient tonight or The Bachelorette?

Should you hump your banker or the pool boy? Or both?!

Once in a while you need to slum it and consume some trash! So before you run off to read some boring Pulitzer prize winning novel “make love” to a scientist or something lame, make sure you ask yourself “is this really what I want right now?”

….your answer may disgust you!

I can’t believe it is already JULY! Time is just flying by. For this weeks reading I am using my Fairy cards – for some reason I just felt like something light and fun 🙂

Have a fantastic week!
xoxo
Kate

Tsk, tsk! My evil alter ego Veronica has slept in again and is only getting around to writing this NOW – at noon on a friday! This better be good….

Time is precious – especially yours. Yet corporations, governments and individual assholes constantly waste it.

I’m talking about complicated recycling rules, being put on hold and having to select bullshit options from a confusing robotic telephone menu, spam emails and of course…..telemarketers and scam callers.

The time has come to take back your power and start fucking with the system. Next time a telemarketer calls you, keep them on the line. Ask inane questions, pretend to be fascinated and if they sounds sexy, flirt a little – just see where it goes.

If a company pisses you off and wastes your time DO NOT get all huffy and threaten to withdraw your business – that’s classic whiny bitch stuff that doesn’t scare anyone. Remain a kind, polite client but become needy. Start asking for discounts and special perks – relax and have fun with it and see what happens.

If someone starts wasting your time but you turn it around and start wasting theirs, do you somehow get back your own precious time that’s been wasted? No. But you’ll be having way more fun!

And time spent enjoying oneself in nefarious ways is time well spent, indeed!

Here’s a great video that inspired me to write this post: