With a little help from my evil twin Veronica, this blog series aims to answer the two burning questions that are probably on every Tarot enthusiasts mind:
1) If this Tarot card were a person, what would they be like in bed?
2) What advice does this card have for you about your sex life? 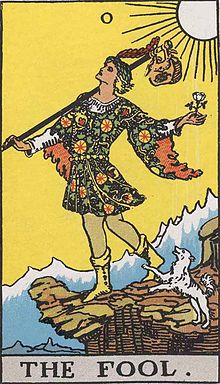 The Fool is both moronic and deliciously refreshing! He approaches life (and sex) with an adventurous fearlessness which kind of makes him an idiot – but in a hot way.

What would The Fool be like in bed? Let me put it this way…

Have you ever had sex with someone who always does the exact same thing, in the exact same way, over and over again, never deviating from the monotonous routine? Someone who balks at the suggestion of trying something new?

The Fool is the exact opposite of that!

The Fool embraces sexual adventures and isn’t scared of being vulnerable or looking stupid. In other words, he doesn’t live in fear of losing his boner or feel like a twit when he’s role playing in a cheesy pirate costume. Life is too short to be sexually self conscious!

Despite past rejections and mishaps, The Fool remains open, flexible and optimistic, both emotionally and sexually. This is a dude who is not afraid of taking big risks in the boudoir, whether he’s confessing his most bizarre kink or holding eye contact for longer than two seconds.

And did I mention he’s up for anything? He’s like an ardent (and sometimes naive) tourist in Sexytown, yearning to see all the sights and become fluent in the language of lust. Basically, he’s someone you’re gonna wanna bang.

Guess what? The Fool has some valuable advice for you:

He says stop being so uptight in bed – let your hair down and let go of inhibitions. Ignore your fear of having your partner laugh at your weird sex fantasies. So what?!!

Tune in next week when I reveal the oozing charisma of The Magician!

This entry was posted in September 2019, Sexy Tarot. Bookmark the permalink.

20 Responses to Sexy Tarot: The Fool