Six of Wands ~ The dangers of being an overachieving jerk-off

Veronica is my alter ego – she says the things I have always longed to say and does the things I’ve always longed to do! When she isn’t whizzing around the world in her private jet full of boy toys, she’s yelling at crows (they are so loud at 5 am!) and sneering at what other people are buying in the grocery store. Here is her take on the Six of Wands… 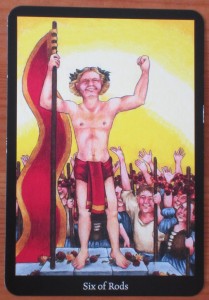 Do you remember that obnoxious scene in Titanic where Leo Dicaprio shouts “I’m the king of the world!” from the bow of the ship? And then dies later?

Well, that’s what this card reminds me of.

And do you know someone in your life who is an annoying overachiever? Some dick who runs marathons, buys “investment properties” and has a “career”?

I know, those people are everywhere!

Or heaven forbid, maybe YOU are an overachiever. It’s okay, there’s still hope for you.

The Six of Wands depicts the fleeting glee that arises when you “succeed” on society’s terms.

It’s all sunshine and silken red loincloths at first, but then you realize that being successful isn’t all it’s cracked up to be. In fact, it demands a certain amount of those sinister traits called responsibility and maturity. Um, yuck. No thanks.

If your “success” brings you more unpleasantness – like more work, more busy-ness, less free time, etc – then you need to re-think what success really means for you.

My personal idea of success is long stretches of uninterrupted free time, anonymity, fancy bedding and not giving a shit about what others think of me.