Veronica is my fun-loving evil twin. She spends her days swanning about her apartment, painting nude men and writing about Tarot. Her readings are blunt and tasteless…yet oddly helpful. Basically, she just wants to slap the crap out of you with her Tarot cards! Now let’s get to today’s reading…

Are there people in your life that totally piss you off?

Pfffft, of course there are!

Do you sometimes moan about how your romantic partner is a total douche-bag who just doesn’t appreciate you?

What’s even more terrifying is that we project our “disowned selves” (the parts of ourselves we don’t like) onto those around us.

Here’s a true story: for the longest time, I felt irritated whenever I saw someone driving a huge, souped up truck. I would think “what a prick!” To me, souped up trucks symbolized flagrant excessiveness – all that gas! – and obvious attention whoring – look at me and my big truck!

But when I looked within, I realized that I LOVE to be excessive – I always fill the bath tub to near overflowing and prefer to eat the best quality chocolate I can find. None of that drugstore chocolate for me! And while I don’t seek attention in an obvious way (yachting around the Mediterranean with a gang of boy toys doesn’t count!), I wish I had more of it.

So there you go.

Not that you needed one.

The Halloween episode is now available to listen to or download! In this episode, me and fellow Tarot readers Rhonda and David discuss ghost stories, favorite vampire novels and all kinds of spooky stuff 😉 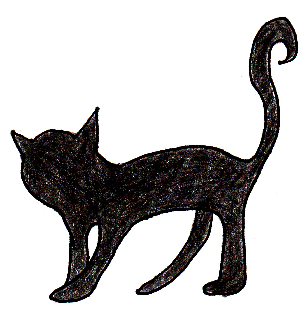 As always, I would love to hear your feedback on our podcast – likes? Dislikes? what do you wish we’d discuss? Any ideas? My ears are open! 🙂

And on a completely different note, I have just set the date (Nov 19th) for my next webinar. This one is on how to connect the cards in a Tarot reading and tell a story. It’s going to be lots of fun and I hope you can make it!

Have a beautiful week 🙂

Veronica is my bad to the bone alter ego and she is here to slap some sense into you! She took time out of her hectic day of hot yoga, napping and netflixing to write you this reading – so you’d better listen up and take her advice…

When I was a little girl, my grandmother had a really pretty silk pincushion that she kept tucked away in her sewing box.

Every time I used to visit I would find that pincushion and violently stab pins into it, delighting in the way it felt to be so brutal with something so delicate.

Now lets pretend that pincushion is your heart and those pins are your negative thoughts. That’s what the Three of Swords is all about!

Sometimes we want to have negative thoughts and feel the drama that arises. Sometimes we secretly get off on  believing that others are betraying us in some way – so we can be all pissy pants about it and mope around in our own misery.

So if someone isn’t quite living up to your romantic expectations of how they should be, ask yourself if that’s really true or are you just causing unnecessary heartache for yourself?

Because admit it, on some level that self-inflicted cruelty is a little bit delicious! At least it gives you a good excuse to binge on chocolate and exotic man-boys.

Or maybe that’s just me.

Although the Three of Swords is the triple penetration card! Pfffft! Teeeheehee!

Halloween is my favorite time of year.

It’s full of costumes and candy and lacks the obligatory, tiresome vibe of Christmas and Valentine’s. What’s not to love?

Every Halloween night I bust out my incense and candles and do a special Tarot reading for myself where I reflect on the past few months and make plans for the coming months.

So I thought I would design a fun, campy, Halloween themed Tarot spread to help you do the same thing! 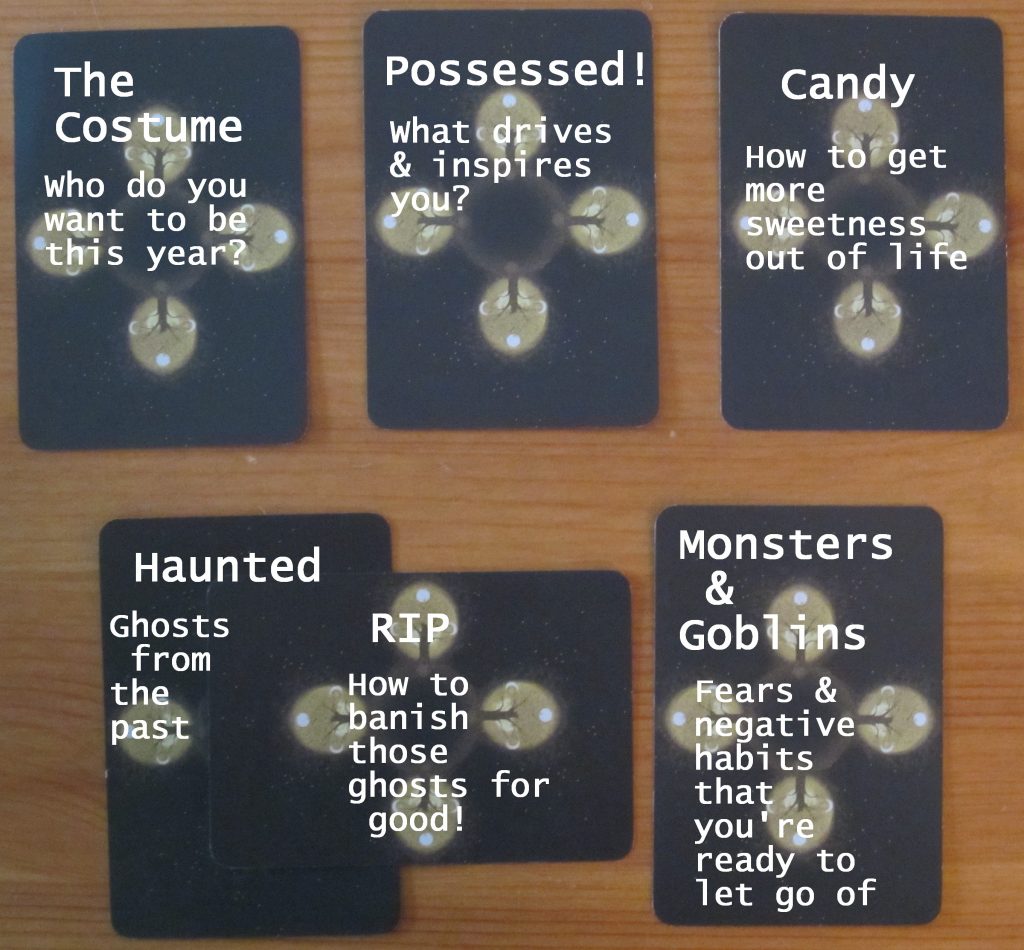 For a printer friendly version of this spread, click here.

If you would like to see this spread in action, using the Anna K Tarot, here is my demonstration video:

I would love to hear what you think! How was this spread for you? And what are your big plans and goals for the coming Winter?

Veronica is my evil twin and partner in crime. You can find her camping out in metaphysical bookstores and napping through a yoga class. When she isn’t scrawling chick-porn on her laptop, she’s writing Tarot readings for this blog…

Your Inner Buddha wants you to just chill the fuck out already. Seriously.

Your personality/ego self is all like “aah! What must people think of me? I don’t make enough money! I look like a bloated whale in these pants! How am I going to get everything done today?”

Meanwhile, your Inner Buddha reclines on a chaise lounge with a joint in one hand, not giving a shit about any of it.

It’s time to meet this mysteriously calm little person inside of you….

When you think “what will the bitches in my office think of my new shoes?”, your Inner Buddha thinks “where can I find some velcro moccasins?”

When you obsess about whether or not your partner really loves you, your Inner Buddha couldn’t care less. It’s completely fucking irrelevant.

So this weekend, don’t try to stop worrying or thinking about stupid pointless shit. That never works. Just ask yourself “what would my Inner Buddha do?”

Imagine this: It’s 8pm on a dark and rainy night. Thunder and lighting boom and flash in the distance as you sit in your armchair by the fire, shuffling your Tarot cards.

Across from you sits Minxy Blue – a friend of a friend. Minxy is a high class escort who lives a lavish lifestyle, “escorting” distinguished gentlemen and the occasional celebrity. But she has recently met someone special who has a problem with her chosen line of work. His name is Vlad Smith and he has proposed to her on the condition that she quit her escort job and do something else.

Minxy loves Vlad but she also loves her work. She’s in a conundrum! She asks you “what on Earth am I supposed to do?”

Just then, two cards come flying out of the deck, landing upright on the table in front of you.

But here’s the challenge: Minxy doesn’t have the time or the patience to listen to you ramble about the cards. So make it quick! In just 3 sentences or less, interpret these two cards in a way that is helpful to Minxy:

Please feel free to post your interpretation in the comments below!

If you would like to see how I interpreted these cards, just click on the text below…

Speak openly with Vlad about how you feel about leaving your career (Two of Cups). But make sure you go within and do some soul searching to find out what is truly important to you right now (The Hermit). There is much light and brightness in these two cards which shows that now is not the time to hide from your feelings and issues, Minxy girl!

My camera battery died right at the end of this video! So please see below the video for my wrap-up comments 🙂

And what I would have added if my camera hadn’t died is this: It’s okay to take your time with important decisions this week. Don’t put pressure on yourself, be gentle and take it nice and slow. Your going through some big changes, so it’s nice to have that shell to retreat back under when things get too intense!

Veronica is my alter ego – she says the things I have always longed to say and does the things I’ve always longed to do! When she isn’t whizzing around the world in her private jet full of boy toys, she’s yelling at crows (they are so loud at 5 am!) and sneering at what other people are buying in the grocery store. Here is her take on the Six of Wands…

Do you remember that obnoxious scene in Titanic where Leo Dicaprio shouts “I’m the king of the world!” from the bow of the ship? And then dies later?

Well, that’s what this card reminds me of.

And do you know someone in your life who is an annoying overachiever? Some dick who runs marathons, buys “investment properties” and has a “career”?

I know, those people are everywhere!

Or heaven forbid, maybe YOU are an overachiever. It’s okay, there’s still hope for you.

The Six of Wands depicts the fleeting glee that arises when you “succeed” on society’s terms.

It’s all sunshine and silken red loincloths at first, but then you realize that being successful isn’t all it’s cracked up to be. In fact, it demands a certain amount of those sinister traits called responsibility and maturity. Um, yuck. No thanks.

If your “success” brings you more unpleasantness – like more work, more busy-ness, less free time, etc – then you need to re-think what success really means for you.

My personal idea of success is long stretches of uninterrupted free time, anonymity, fancy bedding and not giving a shit about what others think of me.