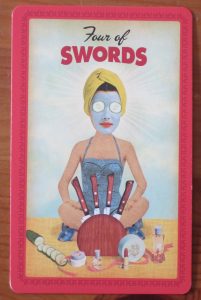 One of the greatest tragedies of modern life is the dwindling art of daydreaming.

Boring technology and shitty media have hijacked our imaginations and we’ve forgotten how to daydream.

Instead we focus on work, work, work and setting stupid, pointless goals until we’re so exhausted we just want to tune out and go comatose in front of a screen.

Do you feel guilty whenever you aren’t “busy”?

Does the idea of doing NOTHING for a stretch of time give you the heebie jeebies?

Then you’re a victim of imagination hijacking and you need to reclaim your inner, mental landscape pronto!

This weekend, cancel all your plans and give up on all your dumb goals.

Make time for sacred emptiness – a stretch of unstructured time where you can just let your mind wander like a meandering loser who has nowhere to be.

Shut off your phone and resist the morbid temptation to stare mindlessly at a screen (unless it’s a window screen). Turn off the radio or your ipod or whatever the fuck you use to make noise. Just sit there. Let your mind go wherever it wants.

If you’re truly broken inside, your mind won’t know where to go. It might start counting things. Stay with it. Nurture the process, not the outcome. So what if your daydreaming leads nowhere?! 99% of my daydreaming doesn’t result in any grand ideas, either. Get over yourself.

The Four of Swords is telling you to stop thinking and start daydreaming. What’s the difference?

Thinking is when you’re trying to solve something. Daydreaming is when you just let your twisted little mind entertain you for an hour or two. It doesn’t sound like much but it’s a rebellious act of clawing back your creativity from the vulcan grip of The System and reclaiming ownership of your own visionary powers! Ahoy!

This entry was posted in August 2020, Veronica Noir. Bookmark the permalink.