It’s almost September! And you know what that means….it’s almost October! My favourite month of all. Pumpkin flavoured things, cinnamon on things, it gets a bit colder and darker and I feel less guilty watching more Netflix in the evenings…but I’m getting ahead of myself!

I am using the Dark Mansion Tarot for this weeks reading…

What do you think the blindfold symbols mean in this reading?

Have a great week 🙂
xoxo
Kate

Let’s face it – our society has a perpetual boner for busy-ness and “productivity”.

If you’ve ever heard the ridiculous saying “idle hands are the Devil’s plaything”, you know what I’m talkin’ about. The mainstream loves to demonize down-time.

Why? Because it gives us time and space to realize we’ve been had.

Are you busy? How busy? And most importantly….WHY?

Where is your frantic and repetitive activity taking you? Hopefully not in circles down the drain of existence.

The Eight of Pentacles asks you to take a long, hard, penetrative look at your busy-ness and find the why behind it.

If there’s passion and purpose to all your bustling, that’s wonderful! You’re on your way to sexy success! But if your just “keeping busy” because you fear the social consequences of becoming a full time navel gazer, have a seat and let Veronica talk some sense into you….

It used to be that premarital sex and banging thy neighbour’s wife (or husband) was the filthy taboo du jour, but now it’s enjoying an unstructured moment of goalless serenity that has the pearl clutchers tittering away.

Want to stand out in a crowd and truly shock people? Here’s my formula: the next time some tepid douche asks “keeping busy?” say “NO, not really” and enjoy the moment of awkwardness where they try to hide the fact that they’re harshly judging you. Good times!

There is no deck sassier than The Housewives Tarot…

I decided to kick it old school for this week’s reading, using the Universal Waite Tarot…

Warning: I start off this reading with a long, boring story about my failed low carb diet.

It’s high time you stopped advertising your thoughts, feelings and future plans and start building a little bit of mystery around yourself…by shutting the fuck up!

The High Priestess tells you to be a little more secretive.

Don’t feel compelled to share every little detail about your weekend plans with the whole world. And not just because no one gives a shit. Because it makes you seem more interesting…and sexy.

Think about it. What you don’t reveal, others will wonder about. They may even project their own lurid ideas onto your blank spaces.

Not everything about you needs to be known. Just reveal a few fascinating tid bits and stop there – don’t go all the way. Like a stripper that only takes off their shoes and gloves. Leave them thirsting for more!!!

Have a good week ♥
xoxo
Kate

One of the greatest tragedies of modern life is the dwindling art of daydreaming.

Boring technology and shitty media have hijacked our imaginations and we’ve forgotten how to daydream.

Instead we focus on work, work, work and setting stupid, pointless goals until we’re so exhausted we just want to tune out and go comatose in front of a screen.

Do you feel guilty whenever you aren’t “busy”?

Does the idea of doing NOTHING for a stretch of time give you the heebie jeebies?

Then you’re a victim of imagination hijacking and you need to reclaim your inner, mental landscape pronto!

This weekend, cancel all your plans and give up on all your dumb goals.

Make time for sacred emptiness – a stretch of unstructured time where you can just let your mind wander like a meandering loser who has nowhere to be.

Shut off your phone and resist the morbid temptation to stare mindlessly at a screen (unless it’s a window screen). Turn off the radio or your ipod or whatever the fuck you use to make noise. Just sit there. Let your mind go wherever it wants.

If you’re truly broken inside, your mind won’t know where to go. It might start counting things. Stay with it. Nurture the process, not the outcome. So what if your daydreaming leads nowhere?! 99% of my daydreaming doesn’t result in any grand ideas, either. Get over yourself.

The Four of Swords is telling you to stop thinking and start daydreaming. What’s the difference?

Thinking is when you’re trying to solve something. Daydreaming is when you just let your twisted little mind entertain you for an hour or two. It doesn’t sound like much but it’s a rebellious act of clawing back your creativity from the vulcan grip of The System and reclaiming ownership of your own visionary powers! Ahoy!

I sat down yesterday to give myself a Summer check-in reading, using my old Tarot spread from last year and… I just wasn’t feelin’ it.

2020 has been such a weird year and my needs and concerns are different now than they were last Summer (and I’m sure yours are too!). So I decided to revamp my old spread and change it up a bit… 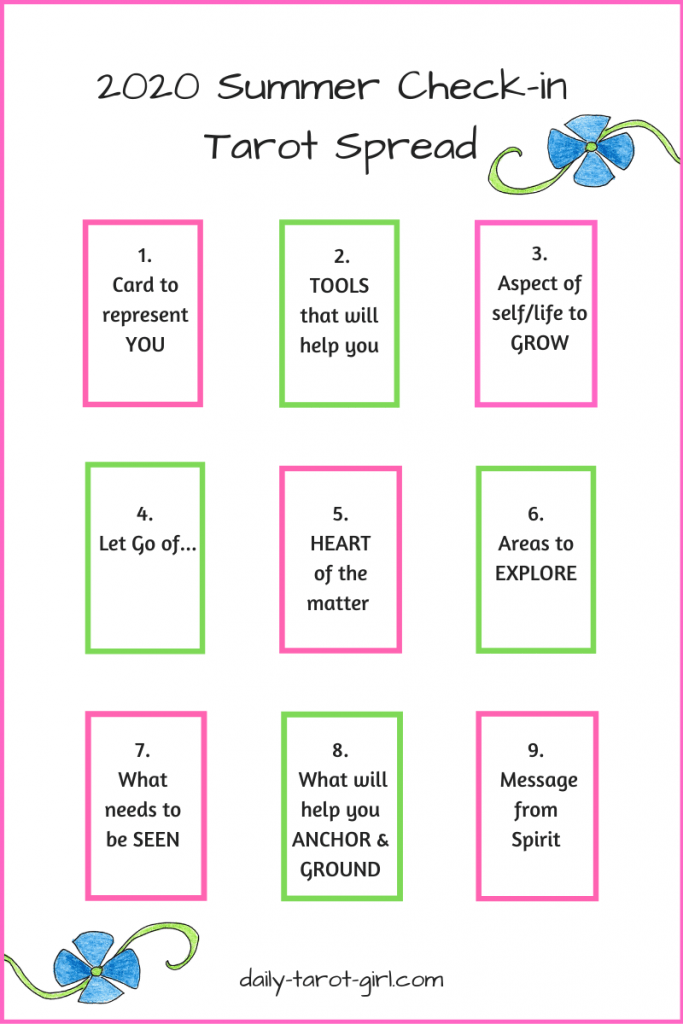 It’s all pretty self explanatory, but there’s a couple of card positions I want to explain more:

Card #5 (The HEART of the matter) – This card will tell you how to connect with your heart and create more love and less fear in your life. It will also give you some ideas as to what is central and most important in your life right now.

Card #7 (What needs to be SEEN) – This is usually something that you aren’t fully aware of, yet is holding you back in some way. For example, I got the Five of Pentacles in this position, which I read as my tendency to isolate myself.

This card doesn’t have to be something that’s holding you back, though – it’s just something you need to be aware of.

Have fun with this spread! I hope you get lots of wonderful ideas, insights and inspiration ♥

It’s August already? WTF happened? Okay, so I’ve been spending my Summer reading books about cults (Cults in our Midst by Margaret Singer and now Cults Inside Out by Rick Alan Ross) and while cults are bad and dangerous and all that, I really think that if I’d been alive in the 1970’s, I totally would have joined the Osho cult that the documentary Wild Wild Country is based on.

But since that isn’t possible, I’ll do the next best thing I can think of – use the Osho Zen Tarot deck for this week’s reading! This has been a long time fave deck of mine and it never disappoints!

Have a good week ♥
xoxo
Kate