You know how when you wear thong underwear you just can’t stop thinking about your ass crack all day long?

And don’t you think it’s ironic that in trying to make your underwear invisible to others, you end up becoming hyper aware of it yourself?

Because how can you ignore something that’s wedged between your butt cheeks? You can’t. It’s not possible.

I bet if you had to store everything you were trying to hide from the world in your butt crack, you would be a lot more authentic!

Anyways, the woman in this Five of Cups is totally pissed because she’s spilled good booze all over her crimson frock. And like any other problem – a chipped tooth, a broken nail or a massive wedgie – her mind is going to focus on that martini stain all. night. long.

Here’s the thing: shit happens. Your boy toy spills his drink on you, you wear thong underwear for some dumb reason, you mow someone over with your convertible. That’s life. But do you really need to dwell on it for the rest of your day? No. You don’t.

Give your hair a flip and move on with things. Pick the thong wedgie out of your crack. Or better yet…get rid of your undies altogether.

Panties are for wimps anyway.

Here is your weekly forecast reading for the week ahead! I am so excited to share with you my new oracle deck – The Duality Deck by Tanya Bond….

Thanks for watching and have a great week!
xoxo
Kate

After a two week hedonistic vacation, my evil twin Veronica is back! 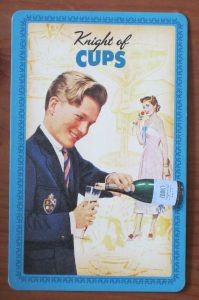 When someone says “I’m a team player!” I immediate mistrust them.

Because “team player” is corporate slang for achieving success by climbing on the backs of others without them even knowing it! Ha!

And also because the term “team player” is just creepy. It makes me think of flourescent lighting, MJB coffee, crying in a public bathroom, and selling my soul for $12 and hour. Just an experience I once had.

What does all this have to do with the Knight of Cups? Let me tell you….

The Knight of Cups is not to be trusted. He’s a sneaky little bugger who will charm your panties off only to try to sell you Amway products or protein powder. Don’t fall into his sticky, sugary trap!

Others may present themselves to you in a highly appealing manner. Enjoy the show, but don’t get sucked in. It’s all a performance.

And for goodness sakes, don’t “invest” your money into anyone’s dreams or schemes (except your own) today.

Here is your weekly Tarot card reading for the days ahead! In this reading I’m using one of my favorite Tarot decks….the Hezicos Tarot by Mary Griffin.

Have a wonderful week!!!
xoxo
Kate

Veronica is my evil twin and….she’s still on vacay! That lazy slut. So I went digging in the Veronica archives and tried to pick a good one for you…..

Happy Friday! The Page of Cups is a sneaky little twerp and he is here with a very specific message just for you:

“I know you sometimes get depressed when you go on Facebook and see that everyone seems to be having a better time than you. But don’t be fooled. Most of those people are totally miserable. Party on!”

Gosh, what a strange thing for him to just say out of the blue. Oh well, that’s the Page of Cups for you!

Have some fun this weekend by focusing on doing silly, unproductive things – like finger-painting, collecting rocks on the beach, googling dirty words, rolling around naked in a pile of mud – you know, the usual “inner child” stuff.

The more fun you have, the less you will resent those assholes on Facebook for pretending to be having the time of their lives 24-7.

Here is your reading for the week ahead 🙂 In this reading I am using the fabulous Vintage Wisdom Oracle by Victoria Moseley.

Have a beautiful week!

My evil twin Veronica is on vacation this week and while she’s probably getting day-drunk on a beach somewhere, I am forced to recycle this old reading she did way back in January. But I thought the message was important – one worth hearing again!

You know what? You don’t have to set any more fucking goals from now on.

You don’t have to become your “best self” or improve or aim higher.

Leave that shit to Tony Robbins.

You’re good just the way you are.

That’s because goals and dreams can drag you down. Oh sure, at first they seem to lift you up – just like cocaine.

You feel all zippy when you paste together your vision board. You’re overcome by that heady assumption that the universe is your bitch and you can just order shit up like at a drive thru.

But then time passes and realization hits you – your vision board is nothing but a shit festival of broken dreams – a beautiful pictographic representation of all the things you’ve failed to achieve this year.

So give yourself a break! Enjoy the NOW. Scrap all your goal books and dreamboards and all other future-oriented crapolla. Your perfect as you are right now.

And this reminds me of a video I saw the other day….

When David, Ronda and I were recording our last episode of the Menage A Tarot podcast, we were discussing other fun uses of Tarot cards, besides Tarot card reading. The subject of Tarot Games came up and an idea just popped into my head. So here it is!

This Tarot game can be played with two or more players. It doesn’t matter if the players have prior knowledge about Tarot or not – anyone can play this game, as long as there’s a willingness to be creative and open minded!

1) Each person chooses 7 cards from the deck (without looking at them!) If you are playing this with more than four players, you may want to choose only five. Don’t let other players see your cards!

2) The first person chooses someone at the table to “read”. This is done by picking one of their cards (which are laying facedown on the table in front of them). In two sentences or less, say something about them that they can confirm with a “yes” or a “no”. For example, if you draw The Hermit for your friend you might say “lately you’ve been craving time alone” and your friend can either say “no, not true” or “yes!”

3) If they say “yes” to your statement, then you get to keep that card – you will want to put it in a separate pile from your original 7 cards. This is your “treasure pile” and these cards won’t get circulated back into the game.

If they say “no”, then they keep that card. Your turn is up and now it’s the next person’s turn. The next person might choose to read for that same person or a different person. Just be sure that when it’s your turn to read that you don’t just keep reading the same person over and over again (unless there’s only two of you!).

4) Once all your cards are gone you may choose another 7 from the deck. All players will have two groups of cards – a stack of the cards they take from other players when they read them correctly (Treasure Pile) and their own cards that they should have fanned out in front of them for other players to choose.

5) The object of this game is to end up with the most cards in your Treasure Pile. You may play this game until all the cards are gone from the deck, or you may set a time limit of an hour or two and whoever has the most cards at the end wins.

If you are playing with people who know nothing at all about Tarot, all the more fun! All they have to do is look at a card and pretend to read it for that person. You’d be surprised at how well this can work!

It’s sometimes helpful to try to just interpret the card literally. For example, look at The Fool – what is happening? A guy is about to step off a cliff. So you could say “you are about to jump off a cliff – metaphorically. Are you thinking of taking a risk right now?”

Or, in the case of Temperance, you might say “you have one foot into something and one foot out”

Alternatively, you may keep a Tarot card meanings book on hand and refer to it throughout the game if you need to. This isn’t cheating and it’s totally allowed in this game!

Some things to keep in mind

Alcoholic beverages and rowdiness are completely acceptable! Unlike when you do a regular Tarot reading, you don’t need to remain sober and mature for this one. Of course, this is entirely dependent on your preferences and the people you are playing with.

The point of this game is to have fun with the cards and play at guessing the meanings of the cards (if you are new to Tarot) and practice your reading skills if you are more experienced.

Should you use the same Tarot deck you use for readings?
If you have more than one deck, use a deck that you don’t usually read with. If you do use your one and only beloved Tarot deck, just make sure to energetically cleanse your deck before using it again for readings.

*Full Disclosure: I have yet to actually test out this Tarot game, mainly because I can’t find anyone whose interested in playing it! I know, I know, my friends are boring. So I may post some updates to this post once I do try it out.

Did you try this game? How did it go? What do you think about using Tarot cards for games? Is it sacrilege or good clean fun? Tell me in the comments below – I’d love to hear from you!

Here is your oracle card reading for the week ahead! For this reading I’m using my Earth Magic Oracle Cards:

Have a wonderful week and as always, please feel free to add your own interpretations in the comments below 🙂

Veronica is my evil twin/alter ego who reads Tarot on my blog every Friday! She loves guzzling fruity martinis, sleeping in and boycotting reality TV shows – but she hates babies, Wal-Mart and her neighbor’s shop vac. 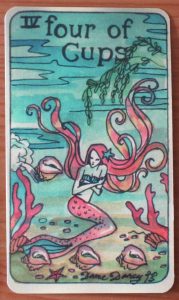 Just because something is offered to you, doesn’t mean you have to accept it….or be grateful, for that matter.

I can’t stand the victim mindset of people who say shit like “you’re lucky to even have a job!” especially when the job in question totally sucks.

Here’s an idea – raise the bar and stop accepting things that bring you no excitement whatsoever.

Not everything that comes your way will be wonderful and amazing – most of it will be quite mundane and boring. Learn to say “mrrhhhr……no” to the spirit sinking stuff.

Maybe your friend tells you that you should read some sappy self helpy book. Or maybe you get offered a volunteer job filing paperwork in a dusty basement. Or the dork next door invites you to a neighborhood barbecue where you can mingle with other jerks on your street.

But do you really want to do these things? Do they light your fire? You be the judge!