Things got a little wild while I was doodling on my ipad the other night and I ended up creating a brand new, sexy Halloween Tarot Spread… 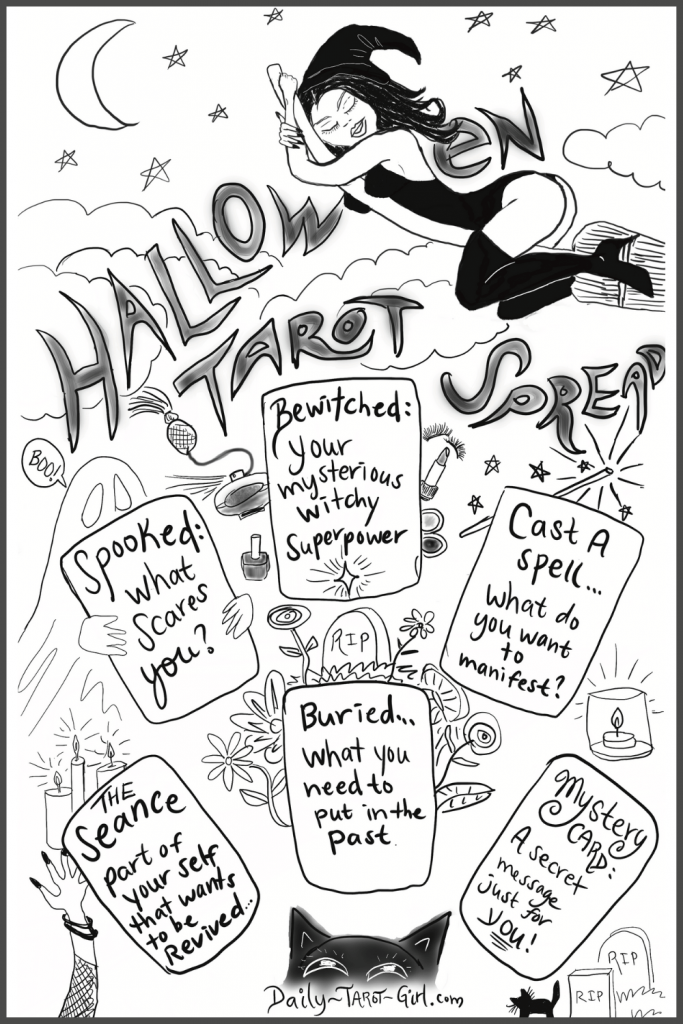 Halloween always feels like New Years to me – a chance to start fresh and set new intentions. It’s also a good excuse to bust out my Tarot deck and do one of those in-depth readings where I light candles, lay out crystals and get super witchy!

Hope your Halloween is cozy, magical and full of Tarot adventures 🙂
xoxo
Kate

Welcome to part 4 of my 22 part Tarot Meanings Deep Dive series – each week we explore ONE major arcana card and uncover it’s secrets, symbols and messages.

Today we’re diving into The Empress – the sensual and luscious mother-goddess of the Tarot!

Grab a pen and notebook, make yourself a cup of hot cocoa and let’s settle in together….

The Darkside of The Empress

Lazy, entitled and unappreciative. Wishing to be supported by others while reclining on her chaise lounger eating bonbons.

The Empress is abundantly creative – whether it’s through her body (fertility) or in a more artistic sense, she knows how to be in the flow of energy! Her endless creativity is a result of her abundant mindset – there is no such thing as lack in the Empress’s universe.

♥ What do I want to birth into the world?

♥ What do I want to create right now?

The Empress’s power lies in her ability to nurture….without being overbearing. When she nurtures something – with her body, actions, thoughts, love, time and energy – it is sure to grow and flourish! But she gives her creations the freedom to grow in whatever direction they wish.

♥ What am I nurturing in my life?

♥ What would I like to grow? What actions, thoughts, words and feelings will help nurture that?

Being open to receive whatever life has to offer, while allowing things to unfold in their own time is the secret power of The Empress. She doesn’t rush or demand or specify how things must be – she allows and then chooses. She’s like a hippy-dippy gardener who lets her garden grow wild, weeding from time to time and watering the flowers she wishes to grow.

♥ In your life, are you the uptight gardener or more like The Empress?

♥ If you were tapped into this “allowing” energy, what would you do differently?

The Wisdom of The Empress

While The Magician makes things happen by his intentions and actions, The Empress sits back and lets the abundance of the universe to flow to her – then she decides what to nurture. She chooses.

The Empress isn’t passive, she just doesn’t lift a finger or break a sweat. And once she envelopes something in her nurturing embrace, allowing it to grow and flourish, she lets go and allows it to take on a life of it’s own.

Did you enjoy this exercise? What is ONE way you can channel your inner Empress today? Let me know in the comments below…

♥ Join me next week as I dive into The Emperor – possibly one of the most misunderstood characters in the Tarot. He’s not as uptight and bossy as you think, I promise!

Join me as I unbox Zeke’s Arcana – a vibrant, otherworldly Tarot deck that is surely one of the most unique decks in my Tarot collection!

At the time of making this video, this deck is still in it’s kickstarter phase: https://zeke.ink/Tarot

Zeke’s Arcana succeeds at being wildly trippy and colourful while also being very readable and easy to work with.

The artwork, done by Julia of Zeke’s Lunchbox, is fascinating and sometimes bizarre, which really shakes your intuition awake and makes you look at the images, instead of just going through the motions of a reading.

I have to say that I was surprised by how quickly I’ve formed a connection with these cards – while I liked the look of this deck from the start, it isn’t the usual style I’m drawn to, so I was curious how it would read…

On my first reading (which I do near the end of this video), it was like the cards could read my mind! It really felt like I was having a conversation with someone who is really clear and direct – it was almost eerie, but in a good way 🙂

If you want to see more of this deck, check out the artist’s website and  YouTube channel – she’s got some really fun art videos and videos showcasing her Tarot deck.

Welcome to part 3 of my 22 part Tarot Meanings Deep Dive series – each week we explore ONE major arcana card and uncover it’s secrets, symbols and messages.

Today we’re diving into The High Priestess – perhaps the most mysterious and secretive card in your Tarot deck!

You might have already seen this video because I originally uploaded it way back in February 2021. After making this video I felt inspired to do a whole series – it just took me 7 months to get my shit together!

Have your pen and notebook handy, grab yourself a bevy and get comfy….

The book I mention in this video is Tarot for Transformation by Andy Matzner (a great Tarot book full of journal prompts and Tarot wisdom – I highly recommend it!)

The veil of pomegranates, the ocean/water, moon, scroll.

The dark side of The High Priestess

Destructive secrets, hiding something, gate keeping as a form of power (not protection).

The High Priestess guards the gateway to the subconscious/unconscious – our mysterious, hidden realms that even we don’t fully understand. Dreams, hypnosis, automatic writing, meditation and shamanic journeying are all are ways to access the subconscious parts of ourselves.

♥ What methods help me tap into the hidden realms of my mind?

♥ How can I honour my intuition more in daily life?

The moon, the seasons, the menstrual cycle, night and day, birth and death – everything is cyclical, everything has a rhythm to it. The High Priestess wisely reminds us that trying to fight the natural cycles and rhythms will result in imbalances being created, and she encourages us to honour our rhythms whenever we can.

♥ What cycles and rhythms can I identify in my life?

♥ How can I better honour my natural energy cycles?

The Wisdom of The High Priestess

The High Priestess reminds you that there is more to you than you think! Your intuition is the key that will unlock the secrets of your soul and unconscious self and by honouring our natural cycles and rhythms, we can tap into our true power.

Did you enjoy this exercise? Did you learn anything new about The High Priestess? Or about yourself? Let me know in the comments below…

♥ Join me next week as I dive into The Empress – the languid, sultry queen of the garden!